the editing journey // shuffling the deck

In my last post, taking notes, I described the beginning of my editing journey, which was pretty much me alternately tearing my book apart, asking too many questions, and pulling my own hair out by the fistful.

Today, we're getting organized. (are you scared yet? you probably should be.) After asking myself 104 questions about Skylar and her story (general recap here!), I tossed around ideas with my sister and ended up with a couple of new ideas that I thought might be worth following.

It felt like my head was exploding. After being sooo organized with my first draft, with the whole plot (or lack, thereof!) meticulously lined up and structured and planned, throwing an ENTIRE NEW PLOTLINE into my head for the second draft was overwhelming, to say the least! So, as I always do when I feel overwhelmed, I started writing. (it's a vicious cycle, friends. it just is.) The rest just... kind of happened. 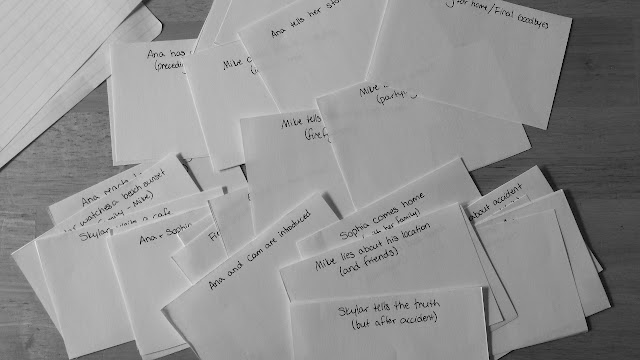 What you see above is every single important scene from my book (some that I liked from the first draft, but mostly new ideas that I wanted to include in Draft 2) written out on an individual note card, in no particular order. (cue FULL-ON PANIC CRISIS in the name of neat freaks everywhere!!!) After taking a few deep breaths to get my heart rate back under control - you think I'm kidding, but no. Actual pulse fluctuation is a thing that occurred during this process - I took my dear little cards and spread them out on the floor. And then I went to work.

(I'd like to take a moment and say that this is not how I normally do things. I don't know where it came from or why it happened, but I will say that thinking about replicating it stresses me out a lot. If I had planned to do my edits like this, I could not have pulled it off AT ALL. It would have been a nightmare. But it just kind of spilled out of me, and it seems to be working? so far?)


First, I sat down and put all 36 cards in order, from the first scene to the last. (This took some rearranging and flipping around, since some of the scenes were pivotal and others were just vague ideas that could have fit in any number of places.) Once I'd found an order that I liked - and that my sister approved of - I split the scenes into chapter groupings. Actually, Hannah did this part and I watched and made helpful suggestions. If y'all have sisters, I suggest that you use them. Family = writing tool #1.


Next, I created a series of colour codes (including important characters and themes aside from the obvious ones) so that I could glance at a card and instantly know what the point of the scene was. 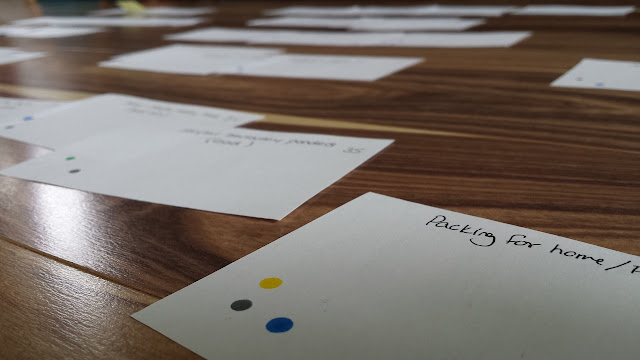 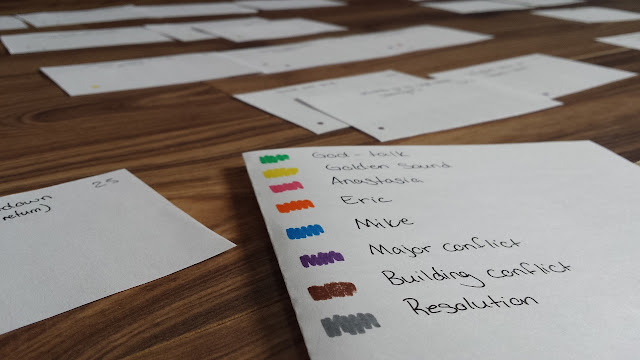 At this point, things were starting to take shape, and my stress was being replaced with excitement. (and exhaustion. I had to take a lot of breaks.) My family went to visit our grandparents for the weekend, but I wasn't about to leave all of this behind! I lugged my cards along, jotted down a few scene ideas in the car, and spread all of my notes out on the kitchen table when we arrived. My final step was to start to flesh out the scenes, add details and really know what I wanted to happen, when. 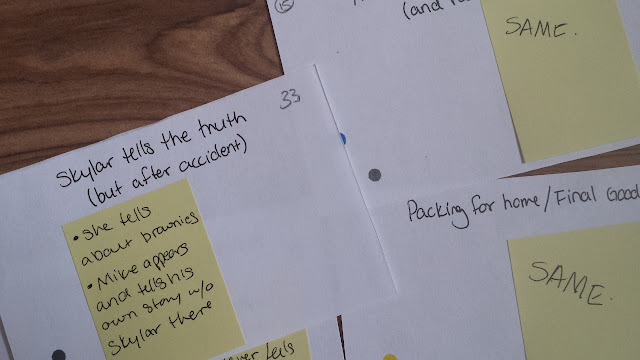 Working around cousins of varying ages and curiosity levels, I pulled each chapter grouping towards me, one at a time, and plopped a sticky note down on every card. (some scenes got four or five sticky notes if they were really important, or if I had multiple ideas and wasn't sure which was the best.) Again, used Hannah as a sounding board. She's pretty helpful that way. This was probably the least exciting part for me, since I knew I was almost done (sob!) and after spending days totally engrossed in my little project, I was starting to get pretty tired. But I persevered! I filled all of those sticky notes (even if it was just with the word "same," to remind myself that the scene from Draft 1 didn't need many changes to fit Draft 2).

And then, right as I was ready to jump into the actual re-writing, even though I was still pretty tired, Danielle reminded me that hello, it's important to take breaks, too. Sometimes it's important to push through your hesitancy, and sometimes you need to listen to yourself and take a day off. More on this in my next post...

So, whew! If anyone actually goes into their edits INTENDING to do this, hats off to you! I still barely even know what happened to my book. But I think I like it? Someone tell me I'm not crazy, please! Also, does anyone else like to colour-code things?? I think my life might be changed forever.

Comments from you make my day! ♥ True story.

Newer Post Older Post Home
View mobile version
Subscribe to: Post Comments (Atom)
I'm Olivia.
I smile a lot, talk way too much, and will die of happiness if you want to just sit and drink tea with me.

I love small towns, big cups of tea, and t


he first snowfall of the season. And you! Thanks for stopping by!